15 Years of Link2Europe: the people behind the scenes 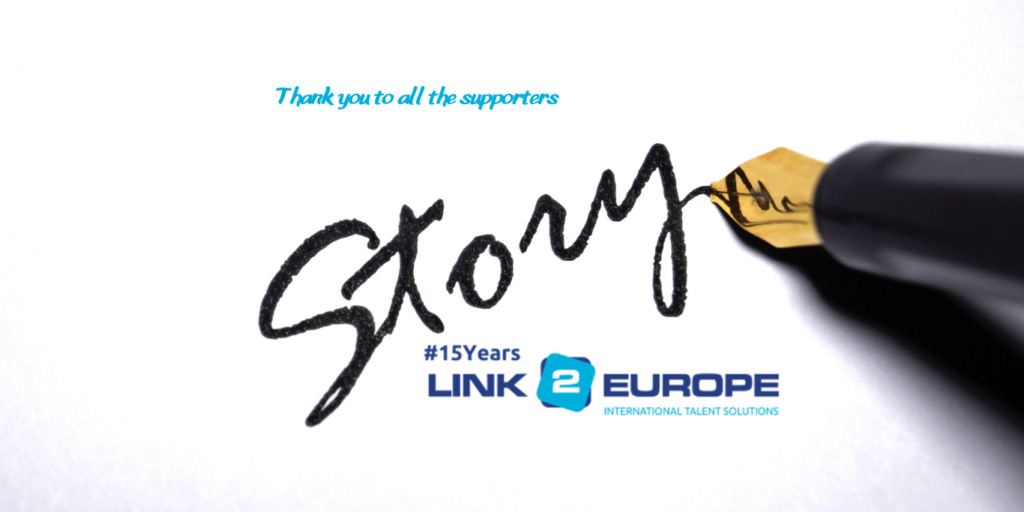 Link2Europe is not the success of one person or one team. Many people and many stakeholders have had an influence on this, or have been part of the success that we know today. I’d like to pay tribute to a few people in particular, and to thank them for the past 15 years.

The Link2Europe story began at Vedior in 2004. In my job back then as National Projects & Sales manager, I often worked together with my colleague Key Account managers and National Sales managers. Marie-Jeanne was working in the Ghent region, and was asked by one of her customers whether we could also look for people in Poland when selecting a large group of operators. That was the seed that was needed to develop the later Link2Europe story. Thank you Marie-Jeanne for the contacts at the time.

Our CEO at Vedior Belgium at that time was certainly not everyone’s friend, and was mainly interested in reorganising and making things profitable. He was certainly not always popular. A man of few words, but when it came down to it, he was prepared to trust people. After half an hour of explanation of my story, which I had prepared thoroughly, and which involved seeing whether we could make selections in Europe, and especially in Poland, and the whole organisation needed to employ those people here in Belgium, he simply said: “Then you will have to go to Poland, Igor”.

Dirk has been my sounding board and support in more difficult times over many years. Dirk has mainly been my boss during his career and, later, when I started Link2Europe, he has always been a good adviser. In addition to my partners, Dirk was always there to talk, to exchange thoughts and to point me in the right direction based on his experience and calmness. Dirk has been a board member for a long time, and has thereby been well able to contribute his experience of the temporary employment sector and his experience as a consultant to our board. Without Dirk, the growth path would not have been so clear, the figures and budgets not so precise, and the basis of the organisation not so solid. I hope to be able to count on his support for many years to come.

Ronny was the man who introduced me to potential investors who were interested in operating in the niche area of international recruitment and temporary employment. I had known Ronny for years from his former position at Distrilog, and later as manager of LIS. Because of his relationship with the temping sector, we met several times and, through him, I had the opportunity to pitch my business idea to his two former co-partners and owners, John and Roger.

Together with “Den John”, Roger formed an entrepreneurial duo that developed ideas and took risks, but also dared to take new and untrodden paths. The idea of filling bottleneck jobs by recruiting outside of Belgium was not only useful for their own company, but they also saw the potential in this new direction. Roger was the more calculated entrepreneur and, from him, I mainly learned how to play the bank, how you could work together well with a supplier in order to still give the best price, and how you could still exude a lot of authority with the necessary calm. Roger was never afraid to roll up his sleeves in the beginning and to help out where necessary, especially when it came to practical matters such as telephony, laminate and other housing problems. But, above all, Roger anD John made the funds available to find the necessary starting capital to start Link2Europe.

Like 2 peas in 1 pod: that was the main slogan that John used in doing business with Roger. Like many things in business, this is difficult in the long run, but you will achieve certain goals that you set. John was the man who could open doors, introduce someone and set the mood when needed. I’d like to thank him for all those times at trade shows or networking events when he made sure that our name was heard and that cards were handed out. John is a man of many words, but he also knew that the deeds were better achieved by others. In the meantime, John has gone more down the road of the uncertain existence of a musician, where his “rushing off to nowhere” syndrome is more appropriate. But John is always welcome at Link2Europe for a coffee and a chat about new ideas and opportunities.

There would be no Link2Europe without Hanna and her sister (Ilona). I got to know Hanna and her sister Ilona during my first visits to Poland in 2004. The enthusiastic sisters were pioneers in setting up a recruitment company in Poland, where candidates who wanted to work abroad could apply.

At the time, Opole had a hundred or so recruitment companies that focused on the recruitment of “German” Poles, who were mainly employed in the Netherlands.

When I came up with the plan to start Link2Europe in 2007, they were both also at a crossroads in their entrepreneurship, and didn’t feel happy about continuing to work in a large and ever-changing structure following a takeover by a large, temporary employment group. We had built up a good relationship of trust and also friendship during the years we had been working together for Link2Europe, and we decided to take the step to invest together in a new recruitment company. After tough negotiations on the modalities, we came to an agreement.

The name Link2Europe was also found after some joint brainstorming sessions, and the Polish branch, Link2Europe sp.z.o.o., was founded at the beginning of 2008. At that time without sister Ilona, who had decided at the last minute to join her husband’s business.

Working together with Hanna, the company in Poland was skilfully built up, and her experience in selection quickly led to the first successes. Now, so many years later, Ilona has finally also joined the company, and Link2Europe Poland remains our main recruitment partner.

At that time, Guido was responsible for what was then called Dactylo Polska. Dactylo was a Dutch branch of Vedior Holding that was active in Poland with 4 offices focusing on recruitment for the Dutch labour market. Within the global Vedior organisation, Guido was probably the youngest “country director”, with what was probably the smallest number of offices (4). But it was certainly fun. It was within his offices that we gained our first experiences of this niche market. I still try to meet up with Guido when I’m in Poland. After his time with Dactylo, he became responsible for the entire Polish, and later Eastern European, branch of Otto Workforce, the largest player in this niche market, and which has become a real temporary employment group in the meantime. If there is anyone who really knows and understands our business, it’s him. There are many Dutch people in Opole, but if you want to go for a pint, do it with Guido and Marcel (his Dutch comrade and ex- colleague, who has also stayed in Opole). In the meantime, you can mainly find Guido in sports centres, where he has his own company that deals with sponsoring and sportswear for skaters and football. Thanks to Guido for the good advice and the great evenings.

Many thanks,
Igor Van Assche

Prices are rising, and so is your salary. What you need to know about Belgian Indexation

The building blocks of the Belgian economy

Belgium is limping behind in the European battle for talent